The agency Immobilier Anthouard offers exceptional properties in the Dordogne, in the Bergerac country. We will offer you today some explanations around the terms castles and mansions that we regularly offer for sale.

The word “manor” comes from the Latin maner, which means a residence, a place where one lives. By extension of meaning, the word means a small castle, a small old house of countryside character surrounded by land. By a second extension of meaning, this implies an aristocrat, thus a person who runs a fief, owner of a house with a particular lifestyle.

Although castles have existed since Roman times, it was in the Middle Ages that they took the definition we all know, that of beautiful fortified houses, testifying to the high social status of the owner. The manor house appeared shortly after the Hundred Years’ War in the 15th century.
A castle is the home of a king or lord, usually built inside or very close to the city.

These properties could have other purposes such as cheese making, animal breeding, viticulture…

But beyond the origins, the architectural and practical aspects differ:

A castle usually has walls, fortifications, moats, a dungeon and is able to defend itself (and defend a population thanks to its courtyard) during an enemy attack. It is a military construction that gradually becomes a place of residence.

The manor is smaller than the castle, it is located in a village and represents the most important residence. The owners of the manors are landowners who have been able, thanks to their income, to afford the construction of this building in beautiful stones.

The most striking difference between mansions and castles is the size of the buildings. Often used to defend cities, castles have large fortifications, large towers, and a fairly developed architecture. The manor houses are much smaller, they occupied an intermediate level between the castle and the farm.

The common points of castles and mansions

These are both residential buildings, made with high-quality stones, often worked (mouldings, sculptures, fireplaces, etc.) that contribute to the exceptional beauty of the French real estate heritage. Indeed, many of these castles or mansions are classified as historical monuments.

Castles and mansions on french territory

Anthouard Immobilier tells you : the Chartreuse

In the Dordogne: A charterhouse and a rural dwelling house, of a beautiful architectural nobility from the XVII to the XIX centuries. Often embellished with beautiful elements: fireplaces, adobe, woodwork, high ceilings…

A charming bourgeois residence, open to its landscape to enjoy its gardens and its land.The main house, on one level, can be decorated with pavilions, common forming a closed courtyard, pavilions at the ends and beautiful porches of entrances. The whole shows a beautiful art of living.

Charterhouse for sale from the XVIII th century, on a park of 7,8ha

With our newsletter, you won't miss any offers. 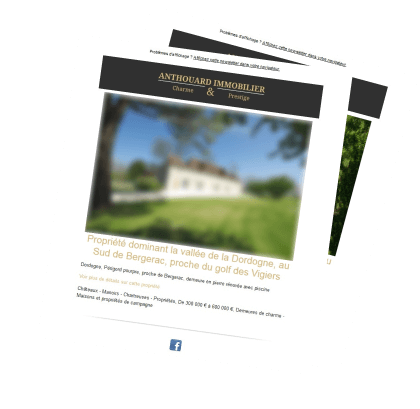